If you need to find a topic that is researchable in a semester and that is relevant to social policy, it can be essential to locate and read overviews on your topic in order to understand how laws, regulations, court cases, and common practices may have influenced your topic.   For that matter, you will need to discover whether there has been any policy at all written or proposed about your idea for a topic.  Here are some starting points to use, in addition to Google, in order to get a general overview about your policy topic.  Wikipedia can also be a very helpful starting place for understanding policy topics, although it is important to cite more reliable sources for your final paper.

Co-published by the National Association of Social Workers and Oxford University Press.
Government Accountability Office (GAO)
The U.S. Government Accountability Office (GAO) is an independent, nonpartisan agency that works for Congress. Often called the "congressional watchdog," GAO investigates how the federal government spends taxpayer dollars. The head of GAO, the Comptroller General of the United States, is appointed to a 15-year term by the President from a slate of candidates Congress proposes.
Legal Source

Full-text source for information on current issues, studies, thoughts and trends of the legal world with coverage back to 1908. Search through Ebsco.

Congressional Service Reports (CRS) are written for Members of Congress and provide succinct, non-biased background information on issues facing Members of Congress. "This collection provides the public with access to research products produced by the Congressional Research Service (CRS) for the United States Congress. By law, CRS works exclusively for Congress, providing timely, objective, and authoritative research and analysis to committees and Members of both the House and Senate, regardless of political party affiliation. As a legislative branch agency within the Library of Congress, CRS has been a valued and respected resource on Capitol Hill for more than a century." More information about CRS

Use the Advanced Search link under OneSearch search on the Hunter Library homepage to find books in libraries on campus, as shown: 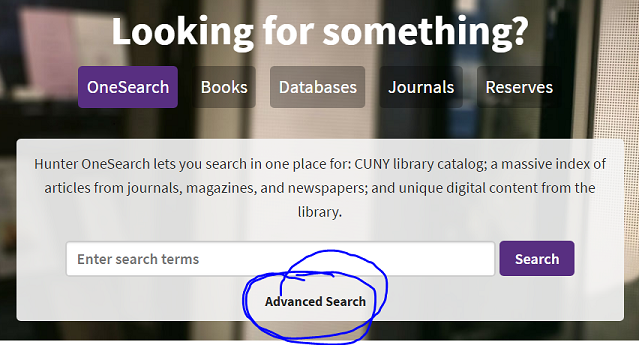 Have governmental policies on your topic been proposed or created, or are you proposing something entirely new?

If you are proposing something new, can you locate any pilot studies similar to what you want to propose?

If something was proposed or created before, is the activity related to your policy topic legislative (laws or bills), executive (regulations), or judicial (court decisions)?

* Legislation, including laws and bills, come from the legislative branch of government, which is Congress (House of Representatives and Senate for federal, Assembly and Senate for New York State).

* Regulations come from the executive branch of government, which includes government agencies such as the Food and Drug Administration.

Definitions of Administrative Law and Regulations:

* Administrative Law- regulations and rules established by agencies formed by federal or state legislatures. The legislative statutes establishing these agencies give them their authority. from: administrative law. (1998). In Mosby's Emergency Dictionary. Retrieved October 19, 2007, from http://www.credoreference.com/entry/5893923.

* Regulation- An agency is often delegated the power to issue regulations by the legislation that created it. Regulations must be made in accordance with prescribed procedures, such as those set out in the federal or a state Administrative Procedure Act. Federal regulations are first published in the Federal Register and later codified in the Code of Federal Regulations. from: regulation. (1996). In Merriam-Webster's Dictionary of Law. Retrieved October 19, 2007, from http://www.credoreference.com/entry/5178899.

Do you know if a law was passed or if a bill was introduced on your topic?

If so, was it at local, state, or federal level?

When did the law pass or when was the bill introduced?  Was it passed as part of another law or did it amend another law?  Has it been overturned?  Is it reauthorized periodically?

Have you found an exact title of a bill or law, a public law (PL) number or a bill number?  These may be helpful for locating the text of a law or bill, and in understanding what you are reading.