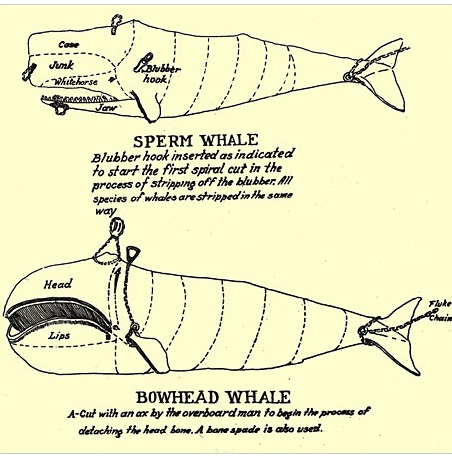 The author traces how American whaling began with whales washed up onshore after storms in New England and moved in the 1650s to offshore whaling.  By the early 1700s whale boats from such ports as Nantucket, New Bedford and Sag Harbor were searching for whales all over the Atlantic Ocean.  By the early 1800s, the Atlantic whale population was mainly gone, and whalers had to make the long trip around South America to the Pacific Ocean.  The "golden age" of whaling was from about 1810 to 1860, and it saw American whale boats dominate the trade in the waters off Alaska and also west of Hawaii.  Whaling began to decline after petroleum was discovered in Pennsylvania in 1859.

Search for Keyword in Subject=whaling + history.

After a Nanucket whaling captain discovered a rich whaling area off Kodiak Island in 1835, American whale boats increasingly infringed on Russian control over coastal Alaska.  By 1845, there were 263 American whalers operating exclusively in Russian North American waters.  The Russian authories sought military help from the tsarist government, which decided that it could not afford to patrol the coast of North America.  A debate began in St. Petersburg over whether to keep the Russian North American colony, which led ultimately to the sale of Alaska to the U.S. in 1869.

The Japan Grounds were a whaling area west of the Hawaiian Islands that British and American whalers exploited in large numbers after 1820.  Their boats would take on supplies in Honolulu, which grew from a small village in 1820 to a town of 11,600 people by 1840.  American interest in and influence over the Hawaiian Islands also began to grow.

Same search as above.